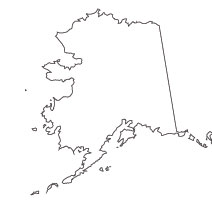 In 1959, Alaska became a U.S. state. Today, its land area is over 600,000 square miles, making it the largest state in the nation by area. With a population of just over 700,000, Alaska still has a lot of open space.  Two-thirds of the state of Alaska’s lands (totaling 222 million acres) are federally owned or managed as of 2020. More than any other state, the usage of land in Alaska is planned. This is due to the fact that over 90 percent of the land in Alaska is managed by state or federal agencies.

If you want to become an urban planner in Alaska, you will have a vast area in which to work. The public sector contains many of the jobs in the field, but you can also find career opportunities in Alaska’s private sector. Keep reading to discover how you can work as an urban planner in The Last Frontier.

How Much Do Alaska’s Urban Planners Earn?

The Bureau of Labor Statistics (BLS) of the U.S. Department of Labor published that Alaska’s urban planners earned an annual median wage of $78,950 in May 2019. Those working in the Anchorage metropolitan area earned even more per year, at $86,790. Those working in Alaska’s nonmetropolitan area averaged an annual salary of $77,270. So as you can see, working as an urban planner in Alaska can be quite lucrative.

What Are Alaska’s Laws and Regulations Surrounding Planning and Land Use?

A variety of federal agencies are responsible for management of Alaska land. They include the U.S. Department of Agriculture –Forest Service. This agency controls land use in two national forests, the Tongass National Forest and the Chugach National Forest.

Another federal agency that controls land in Alaska is the U.S. Department of the Interior – Bureau of Land Management. At the time of Alaska’s statehood, the BLM took care of 272 million acres of Alaska. Much of the control of that land has now been transferred to other federal agencies, as well as state agencies and Native corporations. Currently, the BLM manages 65 million acres of land (18 percent of Alaska’s land). Areas which the BLM manages include land in Anchorage, Glennallen, and the Northern District (including the National Petroleum Reserve, the Central Yukon, Fortymile Wild and Scenic River area, Northwest, Steese National Conservation Area, Utility Corridor, White Mountains, Fort Greeley and Fort Wainwright.

The U.S. Department of the Interior –National Park Service is a federal agency that manages about 51 million acres of Alaska’s land. This land includes:

The U.S. Department of the Interior – Fish & Wildlife Service is another federal agency responsible for managing some of Alaska’s land. As of 2000, they managed 76.9 million acres. Comprehensive conservation plans for which they hold responsibility include:

There are two types of plans that are developed when it comes to state-owned land. One is Area Plans, which typically cover larger areas (the largest one so far being 19 million acres) but may also be used for areas as small as 250,000 acres. These types of plans will establish goals, policies, management intent and guidelines for the use of the land and take two to three years to prepare. The other type of plans is Management Plans, which are more detailed plans for special areas and take one to two years to complete.

In Alaska, planning and land use of state-owned lands largely falls under the jurisdiction of the state’s Department of Natural Resources Division of Mining, Land and Water. They are to manage these state-owned lands for the maximum benefit to the public. Land use planning of these lands is the responsibility of the Resource Assessment and Development Section of the DNR’s Division of Mining, Land and Water. Lands managed by this division include:

Another state agency responsible for planning land in Alaska is the Alaska Department of Fish and Game- Habitat and Restoration Division. They are responsible for reviewing land use plans to make sure that fish and wildlife habitats are not disturbed by them. About three million acres are managed by this agency.

The Office of the Governor – Division of Governmental Coordination, Alaska Coastal Management Program resulted from the Coastal Zone Management Act of 1972. Today, this state agency is responsible for managing Alaska’s coastal areas, all in Southeast Alaska.

The Alaska Native Claims Settlement Act was established in 1971 and instructs the Bureau of Land Management to convey 45.5 million acres of public land to regional and village Native corporations. The Alaska Department of Fish and Game has requested easements for public access across these Native lands so that public waters and lands can be used. Hunting, fishing and recreational activities are not allowed on these easements as the land belongs to a Native corporation. Many of the trails that are reserved on these lands are unmarked and undeveloped.

The Alaska National Interest Lands Conservation Act Program represents an act that was passed in 1980 to designate over 100 million acres of federally-owned land in Alaska as new or expanded conservation system units. Some of these units include the Iditarod National Historic Trail, wild rivers, designated wilderness areas, national wildlife refuges, national parks and preserves, the White Mountains National Recreation Area, and the Steese National Conservation Area. The act was designed to help balance the fledgling economy and infrastructure of Alaska with interest in its natural resources.

What Should Aspiring Urban Planners Study in Alaska?

A graduate degree in urban planning or a closely related area is your end goal when you want to work as an urban planner in Alaska. Again, it is recommended that you select a graduate urban planning program that holds accreditation by the  Planning Accreditation Board (PAB) of the American Planning Association). And once again, there are no such accredited programs in Alaska. One alternative is to choose an accredited online program, such as:

Why Should Urban Planners in Alaska Become Professionally Certified?

The American Planning Association-Alaska Chapter recommends that all urban planners working in the state become professionally certified. This is especially important in Alaska, as there are no PAB-accredited programs available. Professional certification shows that you are educated and experienced and can uphold the standards and ethics of the profession. You must sit for the American Institute of Certified Planners (AICP) exam. The following scenarios explain what criteria you must meet in order to sit for the exam:

The Certification Maintenance Program of the AICP can help you in maintaining your AICP certification. You must complete32 CM credits every two years.   Use CM Search to help find applicable activities and events.

Are There Other Professional Certification Organizations for Alaska Urban Planners?

What Types of Jobs and Careers Are Available for Urban Planners in Alaska?

There have been a wide variety of types of planning projects across Alaska in recent years. Some of them include:

Internships in Urban Planning in Alaska

There are a wide variety of public sector employers that hire urban planners. They include:

In the private sector in Alaska, job titles for urban planners can include: