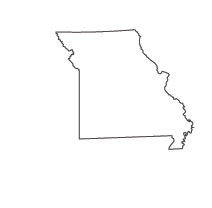 According to the U.S. Census Bureau, the population of the landlocked state of Missouri as of July 2019 was just over 6.1 million. Missouri’s population grew by 2.5 percent from 2010 through 2018. The total land mass of Missouri is 69,704 square miles, with 87.1 people per square mile. It is less densely populated than many other states in the nation. As a result of slower than average growth, the state’s Office of Administration Division of Budget and Planning notes that the state’s rank has declined to the 17thmost populous state in the nation as of 2019.

Projections by this office indicate that Missouri’s population growth will continue to slow by six percent per decade from 2000 to 2030. This slowing of population growth is attributed to more deaths than births occurring in the state. Over the next thirty years, more growth is expected in the suburban counties surrounding Springfield, St. Louis and Kansas City. The greatest population decline is expected in Missouri’s rural counties, such as New Madrid, Iron, and Gentry Counties.

According to the U.S. Department of Labor’s Bureau of Labor Statistics, as of May 2019 urban planners working in Missouri averaged a median salary of $71,860. Those working in the following cities in Missouri made more or less than average, as noted below (some city statistics provided by Salary.com):

Laws Regarding Land Use and Urban Planning in Missouri

Planning and zoning powers for villages, towns and cities are delegated to local governments under the Revised Missouri Statutes. The state’s laws are planned under the traditional national Standard City Planning Enabling Act. Such powers are broadly defined. Under Missouri law, if a city institutes zoning regulations, it must have a Comprehensive Plan. Municipalities may create a Planning Commission to deal with planning and zoning regulations and issues. Land use plans that Planning Commissions adopt are simply a guide to or recommendation for development and are not legally binding.

Zoning regulations, however, define the permitted and conditional usage for various parcels of land, in order to promote health, safety and welfare of the community. Zoning in Missouri is governed by the Missouri Zoning Enabling Act of the Missouri Revised Statutes. Legislative bodies must appoint Zoning Commissions to deal with zoning powers and regulations within a municipality. The public can have input on zoning decisions and regulations, but they are ultimately up to the Commission.

Another type of annexation in Missouri is eminent domain. Under Missouri’s constitution, private property may not be taken for public use without just compensation. Exceptions to this rule include for private ways of necessity, for drains and ditches across the land for agricultural and sanitary purposes, and for public use. Only the state of Missouri can invoke eminent domain over a property – municipalities cannot do so unless authorized by the state.

Urban Redevelopment Corporation Law identifies a blighted area of Missouri and invokes eminent domain over that property. In order to apply, the land must be determined by age, obsolescence, inadequate or outmoded design or physical deterioration to be an economic and social liability. These conditions must be deemed to be dangerous to health, cause disease transmission, enhance crime or cause inability to pay taxes.

The Missouri Recreational Land Use Act creates tort immunity for Missouri landowners who offer their land, free of charge, to the public for recreational use. Recreational use can be defined as winter sports, nature study, biking, picnicking, camping, fishing, hunting, or enjoying scenic or archaeological sites for pleasure, relaxation, education, exercise or recreation. Landowners are not held liable for damages that occur to the public while using their land, under this act.

Your first step in becoming an urban planner in Missouri is to obtain an undergraduate degree. You should pick a program accredited by the Planning Accreditation Board (PAB) of the American Planning Association. In Missouri, there is one such program:

When it’s time to select a graduate urban planning degree program, you should also choose one that is accredited by the Planning Accreditation Board (PAB) of the American Planning Association. No programs in Missouri hold such accreditation. Fortunately, however, Missouri is bordered by eight states (more than any other state in the nation), and some of them house PAB-accredited programs:

Get your graduate degree and work for two years in the field. Then, you can pursue professional certification through the American Institute of Certified Planners (AICP). The Missouri Chapter of the American Planning Association offers a scholarship for members wishing to take the AICP exam but facing financial hardship. Contact Professional Development Officer Brendan Griesemer for more information. The test is offered at the following Prometric test centers in Missouri:

Through the AICP’s Certification Maintenance program, you can meet the 32 CM per two years requirement to maintain your membership. The APA-Missouri Chapter posts eligible events on their calendar.

Projects in Urban Planning in Missouri

Noteworthy projects in urban planning throughout Missouri are:

Internships in Urban Planning in Missouri

Your college urban planning degree program should offer you the opportunity to work as an intern in the field prior to graduation. Examples of prior internships include:

Jobs in the Public Sector for Urban Planners in Missouri

Public sector jobs for urban planners in Missouri, at the federal, state and local levels, include:

Jobs in the Private Sector for Urban Planners in Missouri

Private sector jobs for urban planners in Missouri may have names such as:

Predictions for the Real Estate Industry and Urban Planners in Missouri

Realtor.com predicts that the Kansas City, Missouri housing market may see the biggest decline in housing prices of all major metropolitan areas in the nation, with a four percent drop expected. Low inventory and economic uncertainty are expected to fuel this decline. The average price for a home around Kansas City is currently $250,000, and demand is still great at this price point.

This could mean that migration patterns will shift in Missouri, as more Missourians are expected to move from rural and urban areas into the suburban counties of the state. Urban planners hoping to land a job in Missouri should have minimal problems doing so, as the need will always be there for well-educated planners to help plan new living spaces for citizens living in all areas of Missouri.