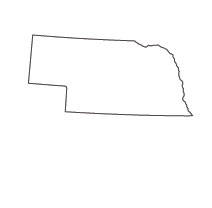 In 2018, the Nature Conservancy of Nebraska transferred 160 acres of Richardson County bluff land to the Iowa Tribe of Kansas and Nebraska. Both sides (tribe and conservancy) agreed to a conservation easement preventing development that would be incompatible with the land’s ecological value. The land is sacred ground to the tribe and just a small part of a larger attempt by the tribe to purchase back more of its reservation lands.

Another interesting statistic about Nebraska is that 92 percent of its total land area is used by farms and ranches (per the Nebraska Department of Agriculture). Agriculture contributes over $25 billion annually to the state’s economy. Additionally, Nebraska holds the record of being the only U.S. state that is triply landlocked—that is, one must pass through at least three states to reach a body of water.

As you can see, Nebraska has its own unique challenges and issues when it comes to land use and planning. Becoming an urban planner in the state involves learning about all of this and more, as you train to work in land usage and plan for the state’s present as well as its future. If you would like to learn more about becoming an urban planner in the Cornhusker State, keep reading.

Statistics offered by the Bureau of Labor Statistics of the U.S. Department of Labor say that urban planners working in Nebraska as of May 2019 brought home approximately $63,650 per year. Those working in various cities across the state earned varying salaries, as you can see below (some city salary data is taken from Salary.com):

Laws and Regulations Regarding Land Use and Planning in Nebraska

Nebraska is a state with a diverse landscape, made up of urban, suburban, rural, and tribal lands. It requires many people working together for the good of the state to plan for its present as well as its future.

Conservation Issues and Planning in Nebraska

Planners in Nebraska must also be concerned with conserving natural resources. According to the US Department of Agriculture, major land use natural resource concerns in Nebraska are erosion by wind and water, maintaining and enhancing soil quality, water quality and quantity, plant condition and health, and wildlife habitat.

Although you will ultimately need a graduate degree in an urban planning-related area, you must start your education by obtaining an undergraduate degree. It is a good idea, if possible, to select a program that holds accreditation through the Planning Accreditation Board (PAB) of the American Planning Association. Nebraska has no such accredited undergraduate programs, however. One alternative is:

Nebraska does house a graduate urban planning program accredited through the Planning Accreditation Board (PAB) of the American Planning Association:

Professional certification through the American Institute of Certified Planners (AICP) displays to the world that you possess the utmost standards and best, most up-to-date training in the urban planning field. To earn this certification, you must pass an exam. The exam is offered at this Prometrictest center in Nebraska:

In order to maintain your AICP certification, you must fulfill their requirement of completing 32 Certification Maintenance (CM) credits every two years. The American Planning Association – Nebraska Chapter can assist you in finding conferences, webinars and events to fulfill this requirement.

Other Certifications for Urban Planners in Nebraska

There are other planning certifications offered for Nebraska urban planners, such as:

Working in Urban Planning in Nebraska

Projects in Urban Planning in Nebraska

Planning projects may be in many various areas in Nebraska. Current ones include:

Internships in Urban Planning in Nebraska

Colleges will usually offer students the chance to participate in an internship. If yours does not, you can always apply for one on your own, such as:

Urban planning jobs in Nebraska’s public sector may include titles such as:

In 2019, real estate industry professionals say that home prices in Nebraska rose 6.8 percent over the previous year. They are expected to increase by another 3.1 percent in 2020. The median home price in Nebraska in 2019 was $164,700, which is $62,000 cheaper than the national median home price. Nebraska benefits from a lower-than-national-average unemployment rate, at 2.9 percent. Therefore, many are moving to Nebraska for its favorable economy and affordable housing. Urban planners can benefit from this as well, as more people moving into a state equals more planning work for them.