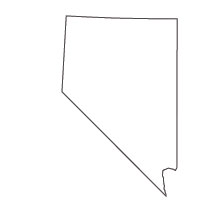 Nevada is home to Las Vegas County, the fastest-growing metropolitan area in the United States. This area provides the perfect illustration of urban sprawl. In 1950, for example, Las Vegas housed just under 25,000 people. Today, the area’s population, including tourists and year-round residents, tops one million individuals. The urbanization of Las Vegas County has changed its landscape as well, with forests and agricultural land being displaced by concrete and asphalt. The urban landscape of the area today includes casinos, amusement parks, and hotels that are entertainment parks in their own right.

Nevada is unique to the United States in that it consists of almost 86 percent federally-managed lands. When it was admitted to the Union in 1864, Nevada’s Constitution included an Ordinance allowing federal control of unappropriated land. Today, most of Nevada’s counties have less than 25 percent of land area available for economic development on private lands. All of these aggregated facts present one-of-a –kind challenges to today’s Urban Planners working across the state.

The Bureau of Labor Statistics notes that in May 2019, Urban Planners in the state of Nevada averaged an annual median wage of $83,870. Those earning in the 75thpercentile made $98,200, while those in the 90thpercentile earned an average of $112,640. Within Nevada’s busiest areas, Urban Planners earned:

Nevada adopted its first state planning laws in 1921. In 2013, the state revised its requirements for Master Plans, also known as Comprehensive Plans. Under Nevada Revised Statutes (NRS), Planning Commissions must be established to adopt Master Plans in communities. These must be applied when a county has over 40,000 in population, or a city has over 25,000. Based on an area’s population, certain elements must be addressed within a Master Plan, including:

The Nevada State Land Use Planning Agency  assists local governments and represents the state in all land use planning. It is designed to help develop and update county-level plans and plans in which local government agencies must work with lands managed by the federal government. As mentioned before, Nevada has the unique distinction of having the most federally-managed lands of any state, at almost 86 percent. The Nevada State Land Use Planning Agency will prepare Public Land Policy Plans to work with federal, local and state governments regarding lands that are federally managed in the state.  They work in conjunction with the Bureau of Land Management, US Department of Energy, US Department of Defense, US Forest Service, US Bureau of Reclamation, US Fish and Wildlife Service, and US Bureau of Indian Affairs.

Zoning is covered under NRS 278.250, a law that grants authority to local governments in Nevada to implement zoning to divide a region, county or city into zoning districts that go along with the area’s Master Plan. Each area has discretion in the contents of the zoning laws based upon the area’s:

Becoming an Urban Planner in Nevada starts with obtaining a Graduate Degree. It is recommended by national planning organizations, such as the Association of Collegiate Schools of Planning (ACSP), the American Planning Association (APA), and the American Institute of Certified Planners (AICP) of the APA that your undergraduate degree be accredited by the   Planning Accreditation Board (PAB). However, Nevada has no PAB-accredited undergraduate degree programs in Urban Planning. Instead, consider programs such as these to provide the foundation for the next step of your Urban Planning education:

Urban Planners working in Nevada are expected to hold graduate degrees in their field. Once again, experts advise that you seek out a graduate Urban Planning degree program accredited by the PAB. Nevada, however, houses no such programs. Suggestions are that you look, instead, at neighboring states, such as Arizona, Oregon, Utah or California, for graduate programs that are PAB accredited. Examples of PAB-accredited schools within these states are:

Professional Certification to Become an Urban Planner in Nevada

The American Planning Association- Nevada Chapter advises  Urban Planners to seek professional certification offered by the American Institute of Certified Planners (AICP).  It is achieved through passing an examination. Earning these credentials will help you to gain more job opportunities and show that you uphold the professional and ethical standards of the profession.

The AICP certification exam is offered twice yearly (in November and May) at Prometric testing centers across the country. Information that the exam covers includes:

Maintaining Your AICP Membership in Nevada

The Certification Maintenance (CM) program of the AICP helps you to find continuing education credits to fulfill the requirement of 32 credits every two years. Examples of recent events that provide credit in Nevada include:

Career Paths and Jobs for Urban Planners in Nevada

With Nevada’s unique status of having more than 85 percent of its land federally controlled, jobs are many and varied for Urban Planners across the state. Whether you choose to work in the public sector, private sector, nonprofit, or a mixture of these, you should be able to find a fulfilling career path in Urban Planning in Nevada.

Public sector positions in Urban Planning that were recently posted include:

Private sector urban planning positions that were posted recently include:

The Outlook for Real Estate and Urban Planning in Nevada

According to the National Association of Realtors, in 2018, Nevada’s real estate industry accounted for $33.2 billion, or 20 percent of the state’s gross product.  Realtor.com predicts that the housing market will decline in the Las Vegas metropolitan area in 2020, with home prices falling.  However, the real estate market is expected to remain steady over the next five years.

Kiplinger predicts that in 2020, job growth in Nevada will be at two percent, which is one percentage down from 2019’s three percent job growth. Still, the state’s economy continues to thrive, they say, with a continuing construction boom in Las Vegas and southern Nevada. Tesla and Panasonic are building a multi-billion-dollar battery factory called the Gigafactory in Reno which will also aid the state’s overall growth. Visitors continue to return to Las Vegas and spend tourism dollars. The addition of the state’s football stadium in Las Vegas, soon to be home to the NFL’s newly renamed Las Vegas Raiders, will also boost Nevada’s economy in 2020, Kiplinger’s experts predict.  All of these factors add up to good news for aspiring Urban Planners who plan to work in Nevada.