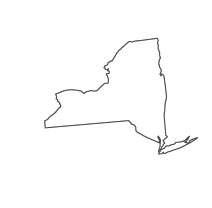 According to Arcadis’ Sustainable Cities Index 2016, produced by a sustainable design consulting firm, New York City is the most sustainable city in the United States. It ranks 20thinternationally, however. The benefits of New York City, per this article, include its excellent public transportation system, which means fewer cars on the road; and the inexpensive cost of its public transportation. Furthermore, more residents live in apartments that use less space and resources. The greenhouse gas rate of New York City is 7.4 metric tons, lower than any other city in the United States (the average for a U.S. city is 24.5 metric tons).

The study also points to the fact that New York City’s planners are tearing down empty buildings and unnecessary parking garages and replacing them with affordable housing, efficiently using the land that becomes available. This encourages more people to live in dense urban spaces.

Of course, New York State is more than New York City. The Empire State has a population as of 2018 of 19.54 million (making it the fourth most populated state). The area of New York State is 54,556 square miles *making it the 27thlargest state in area). The US Census Bureau shows that Queens, Brooklyn, Nassau and Westchester Counties actually had decreases in population between 2017 and 2018. Still, there is much work in New York State for aspiring urban planners, who are needed to plan the urban, suburban and rural areas of the state. If you would like to become one of them, read on.

As of May 2019, according to the U.S. Department of Labor’s Bureau of Labor Statistics (BLS), urban planners working in New York averaged an annual median salary of $76,830.  Those working in various parts of the state made wages higher or lower than the average, as noted below:

According to the New York State Legislative Commission on Rural Resources, there were  1544 towns, cities and villages statewide as of 2008. The majority of these municipalities have land use regulations in place. Under New York State’s constitution, the primary authority for guiding community development and planning lies with cities, villages and towns.

The state’s Office of Planning and Development Division of Planning undertakes projects to stimulate community revitalization. They concentrate on four main areas:

The Long Island South Shore Estuary Reserve Act was established in 1993 to preserve, protect and enhance the natural, economic, recreational and educational resources of the area. This reserve runs 75 miles east from the Nassau County/New York City line to the Village of Southampton in Suffolk County; and from south to north, from the high tide line on the ocean side of the barrier island to the inland limits of drainage areas.

This area has its own Comprehensive Management Plan. This plan is designed to:

The OneNYC 2050 long-term strategic plan was devised to confront the city’s climate crisis, attain equity, and strengthen democracy all by 2050. It focuses on:

Earn an Undergraduate Degree in Urban Planning in New York

Attain a Graduate Degree in Urban Planning in New York

After you have an undergraduate degree, seek an accredited graduate  program (by the  Planning Accreditation Board (PAB) of the American Planning Association). In New York, these include:

School of Arts & Sciences, Dept of Urban Planning and Policy

School of Architecture, Graduate Center for Planning and the Environment

College of Arts & Sciences, Dept of Geography and Planning

School of Architecture & Planning, Dept of Urban and Regional Planning

Become Certified as an Urban Planner in New York

The exam is offered at Prometric testing centers, which, in New York, include:

You may decide to pursue other certifications as an urban planner in New York, such as:

Your urban planning degree program should offer you the chance to complete an internship. This is a valuable experience and a great time to network with other professionals. Examples of internships for urban planners in New York have included:

Jobs within New York’s public sector in urban planning may have titles such as:

Outlook for Real Estate and Urban Planners in New York

New York State’s housing prices are increasing, according to the New York State Association of Realtors. From 2018 to 2019, the price of a home in New York rose 7.1 percent to $299,950. Although affordability of housing is dropping in New York State, home prices are up and inventory is down, the housing market is still expected to remain strong in the future. New York’s economy ranks third nationwide with a gross state product of 1.720 trillion. Positive trends in real estate in New York should encourage this growth and also ensure that plenty of jobs will be available for urban planners in the state.