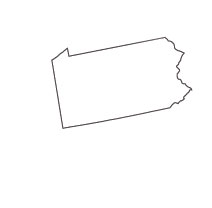 Planning has been important to Pennsylvania for hundreds of years. In fact, the city of Philadelphia, named after William Penn, was planned in 1683 as a utopian ideal, consisting of a grid of broad streets and designed to promote green urban living. This ideal guided the development of Philadelphia and other American cities which followed its model. Penn’s idea was to make Philadelphia a great port city connected to the rest of the country by superhighways.

It might have taken a while, but Penn’s vision has mostly been realized today. Urban planners have played a large part in creating cities like Philadelphia and planning Pennsylvania’s suburban and rural areas as well. Philadelphia’s latest development plan, called Philadelphia 2035, is a citywide vision by the Philadelphia City Planning Commission that aims to restore Penn’s original goals.

With the right education and experience, you can become an urban planner and learn to plan cities, towns and rural spaces in the great state of Pennsylvania. If you would like to discover how you can do this, keep reading.

The U.S. Department of Labor’s Bureau of Labor Statistics (BLS) reports that urban planners employed in the state earned an average median wage of $67,330 as of May 2019.Of course, your salary can vary depending upon where in the state you work. For example, check out these average annual salaries for urban planners working in the following areas of Pennsylvania:

Planning Regulations and Laws in Pennsylvania

Land use regulations were enacted in Pennsylvania in the 18th century, mainly to prevent the spread of fires. Examples of the regulations that were put into place at that time include a law that said one could not store more than 30 pounds of gunpowder within two miles of Philadelphia. Another law enacted at that time established setbacks, noting that a certain distance was necessary between a property line and a structure on that property in order to create enough distance between buildings to prevent the spread of fires.

Just as in many other states, the Pennsylvania General Assembly has left it up to local governments and municipalities to regulate land use. There are four major laws that govern land use in the state:

Philadelphia 2035 is the name of a comprehensive plan developed by the Philadelphia City Planning Commission (PCPC) in order to manage future development and growth in the city of Philadelphia. According to the PCPC, the population of Philadelphia is expected to grow from 6.3 million people to 7 million people between 2010 and 2035.  Philadelphia 2015 is designed to take into account feedback from citizens, businesses, institutions and city agencies in developing a plan for the city’s future. The theme of the plan is Thrive, Connect, Renew. There are two phases to this plan:

The ultimate goal of an urban planner is to obtain a graduate degree. Once again, you should look for a program that is accredited by the  Planning Accreditation Board (PAB) of the American Planning Association. Such programs in Pennsylvania are:

The American Planning Association-Pennsylvania Chapter advocates that the state’s urban planners seek professional certification. After graduating with your graduate urban planning degree and earning two years of professional experience, you can become certified through passing a test offered by the American Institute of Certified Planners (AICP).  It is given at Prometric testing centers, which, in Pennsylvania, include:

The Certification Maintenance Program of the AICP is designed to assist you in completing the necessary 32 CM credits every two years (including  1.5 CMs in Planning Laws and Planning Ethics) in order to maintain your AICP certification.   Use AICP’s CM Search database to find activities in your area, such as:

There are other professional certifications urban planners in Pennsylvania may seek, like:

If your graduate urban planning degree program offers an internship, you will be a step ahead of others searching for urban planning positions in Pennsylvania. You can earn valuable experience and make professional contacts through internship opportunities such as:

Examples of potential jobs within Pennsylvania’s public sector include, but are not limited to:

Examples of potential private sector urban planning jobs in Pennsylvania include, but are not limited to:

The Urban Land Institute Philadelphia and Price Waterhouse Cooper have  released their Emerging Trends in Real Estate 2020 report. While this report concentrated mainly on the Philadelphia area, it noted that many life science companies are relocating to the city and the region, giving out-of-market attention to the area. This is expected to keep occurring through 2021 and provide an economic boon as well as jobs for the city.

According to the Pennsylvania Association of Realtors, demographics of the state’s housing market are changing. They expect the fastest home buying market to be Hispanic residents in 2020. They predict that the state’s residential real estate market will remain strong in the future.

All of this is good news for anyone who wants to become an urban planner in Pennsylvania. There should definitely be a wide variety of jobs available for those with education and experience in the field.