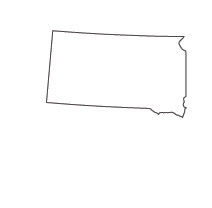 The area of the state of South Dakota is 75,885 square miles. It is the fifth least populated state in the nation. Over half (452,214) of its population of 882,235 (2018) live in rural areas. Those who live in South Dakota’s rural areas must be especially aware of the value of surface and ground waters and properly use and dispose of hazardous materials, such as pesticides, solid waste, recycling, and household hazardous waste. Additionally, they must maintain their water systems, including wells.

This is just one consideration of urban planners who work in South Dakota. Many also live in the state’s largest cities of Sioux City (population 171,544 per the US Census Bureau), Rapid City (73,569) and Aberdeen (28,102). Sioux City is one of the 50 fastest growing cities in the United States, experiencing a population growth of 22 percent between 2000 and 2010. Rapid City is also known as the “City of Presidents” because of its life-size bronze statutes of US presidents, as well as the nearby Mount Rushmore. Aberdeen is a college town, home to Presentation College and Northern State University.

South Dakota contains four major regions of land: the Drift Prairie (covering eastern South Dakota), the Dissected Till Plains (in the state’s southeastern corner), the Great Plains (covering the western two-thirds of the state), and the Black Hills (covering the southwestern part of the state and extending into Wyoming). While the state may not be as culturally diverse as other states in the nation, it does provide a wide variety of land types and uses. This fact should be of particular importance to anyone interested in becoming an urban planner in South Dakota. If that describes you, read on.

The Bureau of Labor Statistics (BLS) of the US Department of Labor notes that South Dakota’s urban and regional planners earned an annual median wage of $58,470 as of May 2019. Those working in various cities throughout South Dakota earned varied wages, as noted below:

Regulations and Laws Regarding Land Use and Planning in South Dakota

As is true in most states, South Dakota authorized municipal and county planning commissions to regulate land use and urban planning. The one exception is that the South Dakota Public Utilities Commission (SDPUC) may determine that a municipal or county land use plan for a transmission facility within a designated area is unreasonably restrictive. Under South Dakota law, a transmission facility is defined as “an electric transmission line and associated facilities with a design of more than 115 kV or lines or facilities that are used exclusively for distribution or gathering.” If such a finding is made, the land developer might need to obtain an Energy Facility Permit from the SDPUC.

South Dakota was one of the first states to create a soil conservation district, under President Franklin D. Roosevelt. Since that time, the state has created conservation programs to protect and manage water, soil, air, wildlife and recreation areas. Under the state’s Coordinated Soil and Water Conservation Plan in 1991, the following gains were made:

The state continues to work on the following conservation goals:

South Dakota is home to over 71,000 American Indians, not all of whom live on the state’s reservations. Nine federally recognized Indian reservations/tribes (called the Oceti Sakowin) exist in South Dakota: Yankton, Standing Rock (Sisseton-Wahpeton Oyate), Lake Traverse, Rosebud, Pine Ridge, Flandreau Santee Sioux, Lower Brule, Crow Creek and Cheyenne River. Each tribe acts as its own separate government, and its land is considered to be private land controlled by each individual tribe. They have distinct, unique interrelationships with the environment that remains essential to the health and preservation of South Dakota’s natural resources.

Getting an Urban Planning Education in South Dakota

Where to Undertake Undergraduate Urban Planning Studies in South Dakota

Where to Complete Graduate Urban Planning Studies in South Dakota

It is recommended that you choose an graduate urban planning degree program that is accredited through the Planning Accreditation Board (PAB) of the American Planning Association. Although there are no accredited programs in South Dakota, neighboring states have them:

After getting your graduate degree, you should consider professional certification through the American Institute of Certified Planners (AICP). In order to take the certification exam, you must work in the field for two years. The exam is offered at the following Prometric test center closest to South Dakota:

The American Planning Association – Western Central Chapter can assist you in finding ways to meet the requirement of completion of 32 Certification Maintenance (CM) credits every two years. You must meet this mandate in order to maintain your AICP credentials. Consult their website for more information.

Urban Planning as a Career in South Dakota

There have been some noteworthy planning projects in South Dakota, like:

Even if you aren’t able to complete your urban planning studies in South Dakota, you can still undertake an internship, such as:

Jobs in the public sector may be at national, state, local or regional levels and might include: